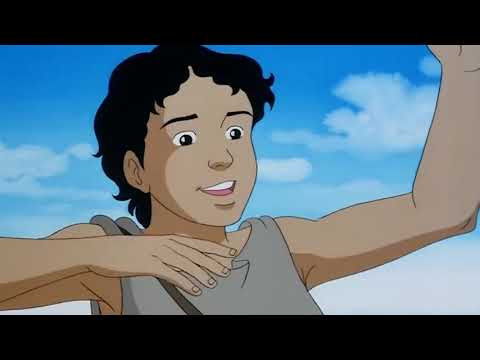 In the Elah Valley, the two armies were ready for battle, with nothing but a hill separating them. The Philistines were much larger than Saul’s army.

A Philistine giant, Goliath, appeared on the hill and his words came roaring like thunder:

Why should you come out to join a fight? I am the Philistine, and you are Saul’s servants. Choose one of your men and let him come down to me. If he overcomes me in battle and kills me, we will become your slaves; but if I know him best and kill him, you must be our slaves and serve us.

The sight of the fierce giant, six cubits and a span (about 10 feet) high, a towering figure on the hill, clad in armor, iron and brass from head to foot, filled the Jews with great terror. There was not a single man in the Israeli camp who dared to accept the challenge.

Day after day, for 40 days, this mighty giant appeared on the hill to repeat his challenge morning and evening.

Then young David, full of courage, approached the giant with just one staff, a sling, and five stones. And with one shot he killed the giant where he stood. I have continued to cut my head off and presented it to King Saul. The Philistines who witnessed this event fled in fear. And David was a national hero.